Currently, it is difficult to understand the impact that Maria Montessori had on the renovation of pedagogical methods at the beginning of the 20th century, since most of her ideas today seem obvious and even too simple.

But at the time, they were radical innovations, which raised great controversy especially among the most conservative sectors.

“No one can be free unless he is independent; Therefore, the first active manifestations of the child’s individual freedom must be guided in such a way that through that activity the child can be in a position to achieve independence ”
Maria Montessori

Montessori Pedagogy began in Italy and is both a method and a philosophy of education. It was developed by Maria Montessori, based on her experiences with children at social risk.

He based his ideas on respect for children, on equality and on his impressive ability to learn.

She considered them as the hope of mankind, so she decided to give them the opportunity to use freedom from the first years of development to promote the child would become an adult with the ability to face life’s problems.

The didactic material designed by María Montessori, are designed to capture the curiosity of the child, guide him through the desire to learn.

The basic principles of Montessori pedagogy are the following:

The absorbing mind of children

Children’s minds have a wonderful and unique ability: the ability to acquire knowledge by absorbing their psychic life. T

hey learn everything unconsciously, gradually, they are able to move from the unconscious to consciousness, moving along a path where everything is joy.

They are compared with a sponge, with the difference that the sponge has a limited absorption capacity while in the child’s mind it is infinite. Therefore, their knowledge enters in their head simply by living.

Cossidering theses aspects, It is understood that the first period of human development is the most important. It is the stage of life in which there is more need for a help because children have a great creative energies.

Sensitive periods are periods in which children can acquire a specific skill properly.

We can defined sensitive periods as special sensitivities that allow children to relate the external world in an exceptionally intense way, they are temporary and thet are limited to the acquisition of a certain character.

It refers to an environment that has been carefully organized for the child, designed to encourage their self-learning and growth.

It develops social, emotional and intellectual aspects and responds to the needs of order and security.

The characteristics of this Prepared Environment allow the child to develop without the assistance and constant supervision of an adult.

The design of these environments is based on the principles of simplicity, beauty and order.

They are bright and warm spaces, which include language, plants, art, music and books.

The class is organized in work areas, equipped with tables adapted to the size of the children and open areas for work outdoors. The materials are organized systematically and in sequence of difficulty. 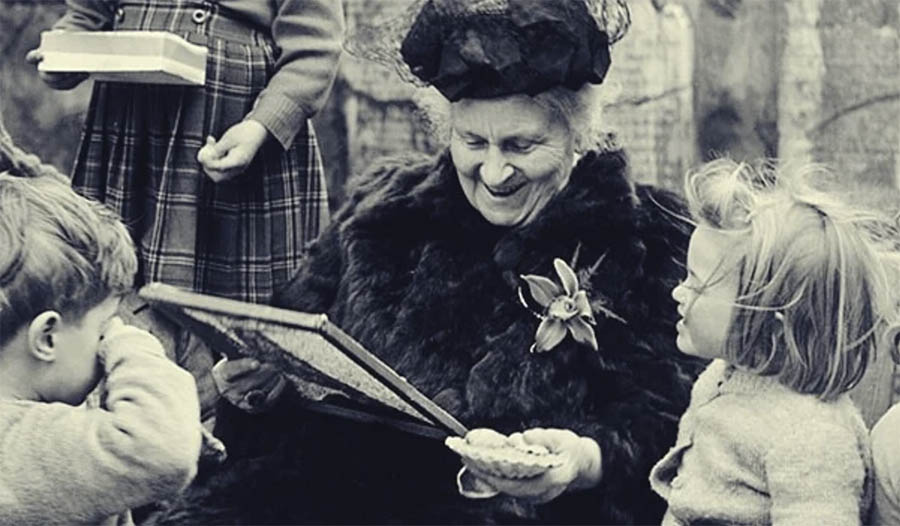 The adult’s role in Montessori Philosophy is to guide the child.

The montessori guide allow that the child can make the environment known in a respectful and affectionate way and therefore, the child will begin to be a conscious observer and be in continuous learning and personal development.

The true educator is at the service of the student and, therefore, must cultivate humility, to walk with the child, learn from him and together form a community.

Want to join the discussion?
Feel free to contribute!

We may request cookies to be set on your device. We use cookies to let us know when you visit our websites, how you interact with us, to enrich your user experience, and to customize your relationship with our website.

Click on the different category headings to find out more. You can also change some of your preferences. Note that blocking some types of cookies may impact your experience on our websites and the services we are able to offer.

These cookies are strictly necessary to provide you with services available through our website and to use some of its features.

Because these cookies are strictly necessary to deliver the website, refusing them will have impact how our site functions. You always can block or delete cookies by changing your browser settings and force blocking all cookies on this website. But this will always prompt you to accept/refuse cookies when revisiting our site.

We fully respect if you want to refuse cookies but to avoid asking you again and again kindly allow us to store a cookie for that. You are free to opt out any time or opt in for other cookies to get a better experience. If you refuse cookies we will remove all set cookies in our domain.

We provide you with a list of stored cookies on your computer in our domain so you can check what we stored. Due to security reasons we are not able to show or modify cookies from other domains. You can check these in your browser security settings.

These cookies collect information that is used either in aggregate form to help us understand how our website is being used or how effective our marketing campaigns are, or to help us customize our website and application for you in order to enhance your experience.

If you do not want that we track your visit to our site you can disable tracking in your browser here:

We also use different external services like Google Webfonts, Google Maps, and external Video providers. Since these providers may collect personal data like your IP address we allow you to block them here. Please be aware that this might heavily reduce the functionality and appearance of our site. Changes will take effect once you reload the page.

The following cookies are also needed - You can choose if you want to allow them: